In: 2020 Riders
Carl “Jay” Meister III was born in 1961 to a riding family who’s mother was National Show Hunter Champion Betty Jayne Baldwin and who’s father was show jumping/steeplechaser Bunny Meister – to try and not be a rider of some sorts what not an option for little Jay. From a very early age Jay rode many ponies across the hunt fields with the Brandywine Valley Hounds and with much disgruntlement showed hunter ponies – even at The Devon Horse Show. Jay got his first taste of jump racing on a pony named ‘Kilts’ in an Old Fashion Race at the age of twelve. A few weeks later Jay went on to ride his fathers steeplechase horse ‘Heather’ to win the ChesCo Hunt Cup. The racing bug was in! Jay would go on to win the Pennsylvania Hunt Cup and Grand National in Maryland, and rode in the Maryland Hunt Cup thirteen times with two seconds. Jay hung up his boots (gave them away) in 1997 and assumed an active role in supporting racing through a board role at the Pennsylvania Hunt Cup, and Delaware Valley Point to Point Association. In the last 20 years Jay has ridden very little which he says he is quite happy with and has consigned himself to an active groom/driver/owner role with his wife’s show jumpers.
Jay will team up with Bumpy Road, a 12-year-old stakes placed Maryland-bred gelding. 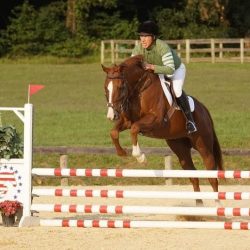